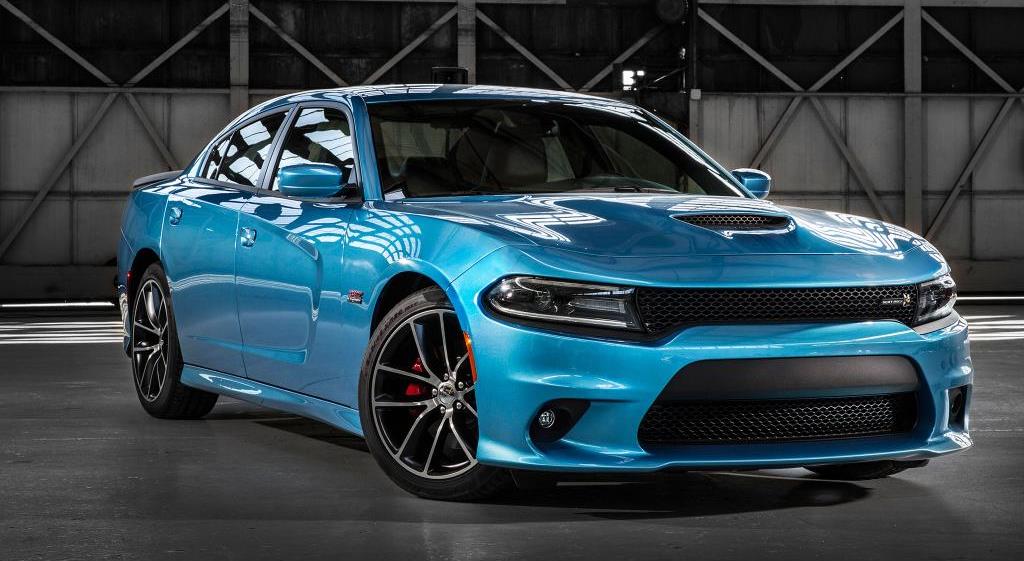 The 2017 Dodge Charger manages to combine the looks of a classic muscle car with modern comforts and luxuries. The resulting car is one of a kind, and its many powertrain options can fulfill the itch for speed. The 2017 Dodge Charger is a luxury car that can be used as a daily driver thanks to its low operating costs and comfortable features.

The 2017 Dodge Charger is not your traditional commuter car, but rather a luxurious and startlingly powerful option that will make you stand out from the crowd. The Charger can be equipped with a V8 engine that lends it unmatched power and performance in its class.

The 2017 Dodge Charger is available for sale today in Oklahoma City, near Guthrie, Mustang, and Moore.

The 2017 Dodge Charger is available in 8 different models that include the SRT Hellcat, SRT 392, Daytona 392, R/T Scat Pack, Daytona, R/T, SXT, and the SE. All models come with rear-wheel drive as standard. SE and SXT models are also available in 4WD configuration.

The SXT can be equipped with a Rallye Package to get 20-inch wheels, special styling, revamped suspension, and a 10-speaker audio system from Bose. A Super Track Package is also available that adds performance features that are only normally available on the higher trim levels.

The R/T model has all the standard features of the SXT model. It is however equipped with a V8 engine and also features upgraded brakes, a revamped suspension, a paddle shifter transmission, and 20-inch wheels.

The Daytona Charger model has the unique styling elements of the RT model along with a premium suspension, alloy wheels, perforated leather upholstery, and all the features of the Premium Package besides the navigation system and audio system. These can be equipped separately.

The R/T model can be further enhanced with the Scat Package that adds a V8 engine, enhanced brakes, sports-tuned suspension, rearview camera, rear parking sensors, and 8-way power customizable front seats. The leather and suede upholstery can be opted for separately.

The Daytona 392 has all the features of the Daytona and Scat Packages in addition to premium brakes.

All models except for the SE can be equipped with a Driver Confidence Package. It includes auto-dimming side view mirrors, blind spot monitoring, rear parking sensors, and cross-traffic alert. The Daytona and SRT 392 can be equipped with the Technology group that has automatic wipers, lane departure alert and intervention, forward collision alert and mitigation, automatic braking, a power customizable steering wheel, and automatic wipers.

The Hellcat and SRT 392 models can be equipped with a premium 19-speaker audio system from Harman Kardon.

The 2017 Dodge Charger has not changed much from its previous model but it does feature some subtle curves to the side that enhance its overall profile and speedster look. Thanks to the new styling elements, the exterior looks compact and aggressive.

Looking at the 2017 Dodge Charger from the front you see its unmistakable Star Wars headlights, low nose, and classic Charger grille that makes this car such an unique ride.

While the exterior attempts to impress with its low stance and aerodynamic profile, the interior stamps a seal of perfection on the whole 2017 Dodge Charger’s design. The interior has a luxurious sports car feel. The steering wheel is small and compact, and there’s a single-tone dash that contains a display screen and has other important controls close to hand.

The SXT and SE models carry a 3.6-liter V6 engine under the hood that can generate 292 HP and 260 lb-ft of torque. With the V6 engine, the SXT and SE can deliver 30 MPG fuel economy on the highway. If you are looking for a little more power, then equipping the Rallye Package boosts the power of the Charger to 300 HP and 264 lb-ft of torque.

The V6 engine configuration is available in 2WD as well as 4WD. However, all V8 engines are only available with a rear-drive configuration. Buyers get a quality 8-speed automatic transmission on either engine.

The R/T model can be equipped with a 5.7-liter Hemi V8 engine that can generate 370 HP and 395 lbs. of torque. The addition of a cylinder deactivation feature keeps the fuel consumption decent. If your need for speed is not satisfied, then you can go for a 6.4-liter V8 engine that can dish out 485 HP on the SRT 392.

Finally, the extreme speedster engine is available on the SRT Hellcat. This 6.2-liter V8 engine is a performance beast that can produce 707 HP and can reach a top speed of 204 mph. The Hellcat does not take long to get into its groove - it can go from 0 – 60 mph in only 3.7 seconds.

Each model is equipped with a perfectly tuned suspension and transmission that utilizes the strength of its powerful engine to the fullest. The steering is also exceptionally responsive, resulting in a perfect package that you will not be able to resist once you’ve driven it once.

The 2017 Dodge Charger is a powerful beast that presents buyers with a sleek interior. The dazzling interior of the 2017 Dodge Charger recreates the retro magic of the original Charger. You get a classy T-handle shifter that regulates the automatic transmission. The 8.4-inch screen sitting in the center pairs that retro vibe with modern luxuries.

The spacing between the front and back row seats is perfect in 2017 Dodge Charger. The front row passenger and driver have ample shoulder space while the passengers in the rear will not be disappointed by legroom or headroom either. Looking at the 2017 Dodge Charger from the outside you may be given the impression that the interior would be small, but once you get into the cabin you are struck by its spacious interior.

In short, the 2017 Dodge Charger is a performance-oriented vehicle that is laden with luxurious features which no other competitor in its class can hope to match.

The 2017 Dodge Charger exceeds in the safety department as well. It has managed to impress in nearly all crash tests. When such a pedigree of safety is combined with modern tech it results in the one of a kind vehicle that is the 2017 Dodge Charger.

The standard safety features on all models include a full-length curtain airbags, rear parking sensors, and a rearview camera. The upper trim levels are equipped with additional safety features such as a cross traffic alert, blind spot monitoring, lane departure warning, collision alert, and cruise control. These features can be added to the lower models as well through different packages.

The Technology Package is a noteworthy optional upgrade that equips even the lower trim models with premium safety features. The 2017 Dodge Charger earned an overall 5-star rating over all the different crash tests conducted by the government.

The 2017 Dodge Charger is for sale in Oklahoma City, near Del City, Midwest City, and Yukon, OK.